Fun and scary Halloween activities done by our ESO students 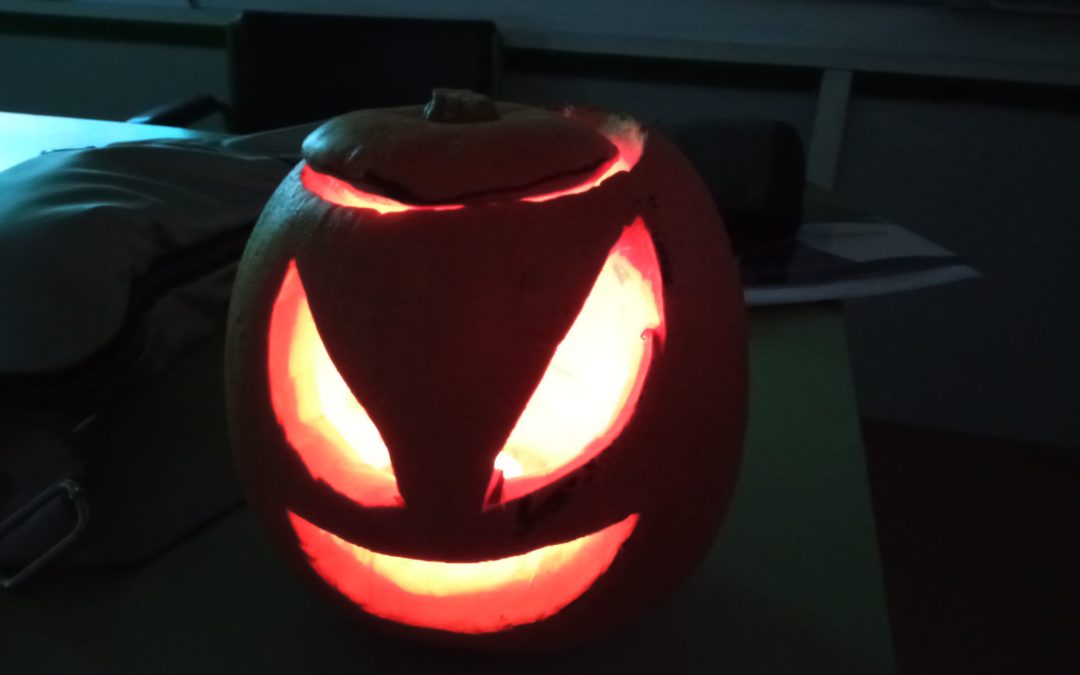 A big amount of activities were carried out during the last week of October as we celebrated Halloween in our school.

In 1st ESO we did a Kahoot about Halloween vocabulary and then we did what we called a “Flying ghost competition”. Each student drew and cut their own ghost in a tissue paper and then, they made it fly!

How did they do that? They used the static electricity generated in a balloon to make them fly. Some of them were flying for more than 4 minutes!!!

In 2nd ESO we decorated our classrooms with special Halloween motives that we had prepared during tutorial classes. We prepared some ghosts, vampires and black cats which produced a scary environment. However, the most impressive elements were the Halloween pumpkins made by SIEI 3r ESO students. They worked hard to get them ready, but they were so good that they really seemed American.

In 3rd ESO we did some Halloween science experiments. The first one was called the “Fried green egg”. Each student made their own liquid indicator (with red cabbage liquid) and mixed it with the egg while it was frying in the pan.

How did they do that? Ahhh, the sweet smell of science! Students made their own red cabbage indicator that tests the acidity or alkalinity of certain liquids.

The second Halloween science experiment consisted in making “Green Fire Jack-o-Lantern”. This is an outdoor project. There isn’t a lot of smoke produced, nor is it particularly toxic, but the heat is intense. Students poured some methanol into a container. How much methanol you use will determine how long your fire will burn. We used about a half cup of methanol for approximately 10 minutes of fire. Then they sprinkled some boric acid into the liquid and swirled it around to mix it up. Finally, they set the container on a heat-safe surface and ignited it with a lighter. Green fire appeared!

How did they do that? When boron ions are heat­ed, they move to an un­sta­ble (ex­cit­ed) state. When they re­turn to a sta­ble state, they re­lease en­er­gy in the form of a green flame.

In 4th ESO, students created a cooperative video telling the story of “Stingy Jack”, an Irish myth which originated the practice of making carved pumpkins for Halloween, called Jack O’Lanterns. Students recorded themselves reading the story and paying attention to intonation, characterisation, lights, scenery, sound… Some of the videos were used for a comprehension activity in 2nd English class.

This website uses cookies to improve your experience while you navigate through the website. Out of these, the cookies that are categorized as necessary are stored on your browser as they are essential for the working of basic functionalities of the website. We also use third-party cookies that help us analyze and understand how you use this website. These cookies will be stored in your browser only with your consent. You also have the option to opt-out of these cookies. But opting out of some of these cookies may affect your browsing experience.
Necessary Always Enabled

Any cookies that may not be particularly necessary for the website to function and is used specifically to collect user personal data via analytics, ads, other embedded contents are termed as non-necessary cookies. It is mandatory to procure user consent prior to running these cookies on your website.